Skip to the content
[email protected]     01273 463677
Contact Us Services My Account Login
Login / Register
0Cart £0.00
Search
Follow Us
CUSTOM MADE SANDING BELTS
Narrow & wide belts made to any size & specification. Use our belt calculators to order your own custom belts.

BOOK A SITE VISIT ›
TOOL SERVICING & REPAIRS
Send us your air tools for servicing to get them back up and running as good as new, with free advice on preventative maintenance.

Good quality zirconia, with a fast and consistent cut. Best for medium duty applications, on grinders with power rated at less than 1000 watt.

DISCOUNT APPLIED AT BASKET/CHECKOUT
Click Here To View Our Range

Good quality zirconia, with a fast and consistent cut. Best for medium duty applications, on grinders with power rated at less than 1000 watt.

Turbo Zirconia Flap Discs have a zirconia grain, which lasts considerably longer and cuts more quickly than aluminium oxide. This is due to its self-sharpening grain which does not dull as quickly, however in order for this to be effective it does need to be used at higher pressures to break the grit down or it will just "glaze" over the workpiece and not actually cut. As such Turbo Zirconia Flap Discs are best used on high pressure grinding/machining applications.

Due to the very aggressive and fast-cutting nature of the grain, zirconia is generally only available in the coarse to medium grit range (often no finer than P120.) For finer finishing stock removal is not the priority so less pressure is likely to be applied and zirconia would not therefore be suitable.

Zirconia is in some cases supplied with a "topsize" (also known as "top coat", or "supersize layer".) This is a coating which is sprayed on to the grit to act as a coolant when working on heat-sensitive metals such as stainless steel and exotic alloys, and therefore reduce discoloration or burning. It can however also act as a lubricant to help reduce loading (where stock removed from the workpiece builds up on the abrasive and makes it less effective) on softer metals such as aluminium. The presence of a topsize does reduce the aggressiveness of the grain however, and so it is best not to have one if discoloration will not be an issue, for example when working on mild/carbon or structural steel.

With zirconia flap discs in particular, the power of the operator's angle grinder is an important factor - the higher the content of zirconia and the tougher the backing the more powerful it needs to be in order to break down the grain and perform more effectively. Conversely a lower grade flap disc will wear much more quickly if used on a high powered grinder. As a general rule air powered grinders are usually quite powerful and will therefore often be best served with a tough poly-cotton backing & high grade zirconia, the same for electric tools with power ratings of 1000 watt and above while lower grade discs with less durable backings would be more suitable for lower powered units.

Available in various other forms including abrasive belts, velcro-backed discs and fibre discs. Roloc discs, also known as speedlok, siafix, quick-release, and quick-change discs, are also very popular and often used for blending/removing welds and spot repair. Our Blue Turbo Zirconia Rolocs in particular are very aggressive and available as coarse as P24, therefore being useful for fast stock removal, while the Green Nitro Zirconia Rolocs have a topsize and are ideal for reducing heat generation.

High quality and popular range of various products at very competitive prices. Spend £250 or £500 across the range and receive a 10% or 15% discount!

Demonstration Van
We offer no-obligation site visits in our demonstration van, where we review your processes and offer any relevant products & solutions to improve your production times. 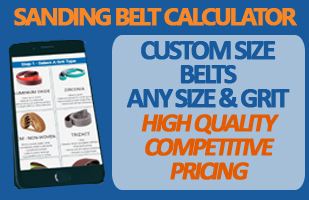 Interested in a trade account? Call on 01273 463677 or email us at [email protected] to enquire about credit terms and one of our sales team will be able to assist you.